What people are saying:

“The lyric content of Dean’s songs & the heartfelt way he delivers them are going to make you an instant fan! He is a true Texas poet of the highest order.” – Marlin Lee, Armadillo Hall, Taylor, TX.

“Ferrell is a storyteller…. His music is an audio screenplay. ” – Ric Schulte, Hullaballoos, College Station, TX

“Dean’s songs are mostly stories about life, there’s truth in all of them, but as the saying goes, he never let the truth get in the way of a good story. Think of a cross between Townes VanZandt, Robert Earl Keen with a little Buffett mixed in to create his own brand of Folk, Americana, Texas Country ”

About Dean’s song writing: “They’re not all true, but they’re all real.”

With a lyrical style compared to the Texas Folk/Country pioneers of the 70s and 80’s, Dean paints pictures taken from his experiences, traveling the world, military service, working offshore, adventure, love, loss and redemption. The songs aren’t all true, but they are all real.

“Fixin’ fence and cuttin’ hay, workin’ in the sun all day, pray to God that it won’t rain ’til the bailin’s through. That old cow with the crumpled horn, has gotten down behind the barn, go get the truck, pull her out like I asked you to.” – from “Workin’ in the Sun”

That’s how it started for Dean Ferrell, making up songs to keep his mind off the Texas heat and the dust and the bugs and the deafening rumble of the tractor. Dean’s grandfather never finished the third grade, but he was a smart man who knew all there was about cattle and working a ranch. Having not needed a formal education , he didn’t think much of it. Dean’s dad though thought differently. He sent Dean off to be the first in his family line to get a College Degree, with the advice, “Don’t tell your granddaddy that you’re studying animal science down there, he won’t understand.”

They say you should write about what you know, and that’s what Dean writes. He’s seen the good times and felt the bad. He’s met crazy people and got a little crazy too. He’s partied too hard and also just sat and watched the world. He’s seen pilot whales and icebergs on Baffin bay, joined into a neighborhood parade during Carnival in Rio, milked cows and hauled hay, spun vinyl records while tending bar and hoping he didn’t have to be the bouncer too if the drinking went too far, spent a month on a frozen mountain top not far from the DMZ, lost best friends and maybe saved some too, watched 3rd world performers go through their motions behind the protection of chicken wire while police with M-16s looked on, eaten street vendor food cooked over a coal burning hubcap, been away from land and family for way too long and tried to write it down along the way.

Its funny how life meanders along and takes you places you never thought you’d go. Dean, a fifth generation Texan, really never intended to leave the family Dairy farm and definitely not leave Texas, but with a kid on the way a man starts to think a little more about his future. Day man bartender at the Dixie Chicken Saloon was not that future and besides this was his second time to be asked to leave Texas A&M for spending more time on Northgate than in class. He joined the US Air Force to do his patriotic duty and with an assignment wish list full of Texas bases of course they sent him to Okinawa, Japan. You can’t get decent bbq or chicken fried steak over there, but he was able to live off fried rice and Kirin beer at Mickey’s Billiards just off base, usually about 2:00 am. You could say he was still living the college life despite the young family. Temporary duty in Korea, Thailand, the Philippines for months at a time didn’t help the relationship either, then again there’s three sides to every story: his side, her side and the truth. With his military commitment up, Dean headed back to school for the third time. He eventually earned his degree in Wildlife and Fisheries Sciences, this time studying wildlife in the classroom more than the bars.

He found a job with a research drill ship and was gone again, off to Rio de Janeirio – Guam – Ecuador – Chile – Panama – Germany – Japan – Singapore – China – Austrailia… you get the point. The two month stretches at sea must have been either the breaking point or just a good opportunity for her to move on, because Dean found out the day after his return from an expedition out of Hawaii that his wife had filed for divorced days earlier. Having your world turned upside down can have a good side, firstly, heartbreak is good for songwriting and secondly, eventually you may realize the life you had wasn’t all that great anyway. Dean says,”I’m a firm believer that God has a plan and it will work out for the better in the end.” Today he has a new life, a new loving wife and life is good.

These experiences can’t help but give birth to soulful , moving songs, songs that make you think and songs that make you laugh. Dean’s songs are mostly stories about life. And there’s a little truth in all of them, but as the saying goes, he never lets the truth get in the way of a good story. 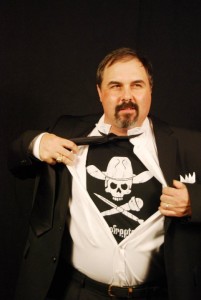